We are a league of about 21 teams who play darts in the Forest Hill and surrounding area in south east London. All games are played on Thursday nights and start at 9pm. We Play Two games of triples (701) followed by Three games of pairs (601),Six singles (501),and Two games of triples totalling 13 games with one point scored for each game won.

If you have any comments or suggestions about this site or any other matter you can E-Mail me at foresthilldarts@yahoo.co.uk or see me at any of the monthly league meetings.


A WORD FROM THE CHAIRMAN

TO ALL LEAGUE MEMBERS

During this time we have seen players from the leagues that have attained county status who in turn have attracted county player in to the League.

Your loyalty in making this League so successful, Competitive & Friendly to play in is the reason why we have grown over the last 40 years.

As I have said many times “it’s your League” and it is all of you who should be proud in what you have achieved.

Once again a big thank you to all.

Division One
The Railway Telegraph


For Details on  all of the Competitions please click Here

M Winzar , G Hill & S Ferguson
Who have been called up to play county darts for LONDON 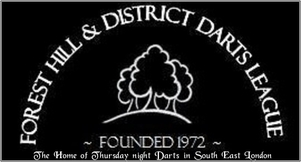 On the 19th of May 2012 the League will be celebrating our 40 year anniversary.
The Event will be held at:

Please take note that this event is Smart Dress only.
Trousers, Shirt & Tie

Entry £10.00  SOLD OUT
Limited availability, so first come, first served.
If you would like a ticket please contact your Captain

Thanks
Chris Parker
AKA Chunky

If you are looking to play darts in
Forest Hill or anyware in the surrounding district contact Chris Parker @ foresthilldarts@yahoo.co.uk